Up until two weeks ago I hadn’t eaten fish since I was fifteen years old. I always felt that vegetarians who ate fish were cheating, so when I gave up red meat and chicken I figured I needed to give up fish too. I was nervous about class today because of how torturous I found the poultry class yesterday. I feel less badly for fish than I do for chickens though. Fish is also extremely healthy for us to eat, however it’s associated with a lot of environmental issues due to overfishing and aquaculture. While my ethical reasons are not that strong for abstaining from fish, the environmental concerns definitely are an issue for me. Morals aside, I was able to handle filleting the fish so I wanted to be a good sport and try what we created. 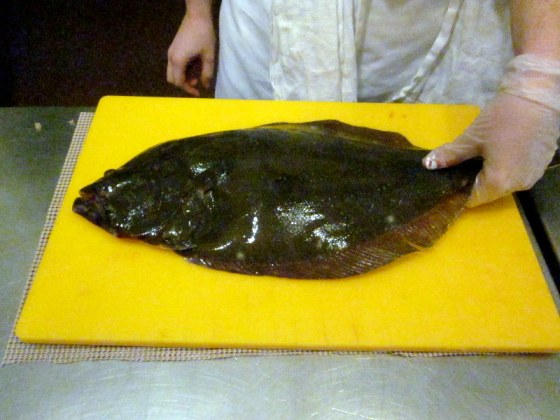 Check out this flounder, it’s eves are both on one side! Did you know that flounders start out as round fish when they are hatched and have eyes on either side of their head and swim normally, but as they mature they start swimming sideways along the bottom of the ocean and one of their eyes drifts over to the top. So weird, right?

Roasted monkfish… Monkfish is a super ugly fish that is considered the “poor man’s lobster” because it has a similar flavor to lobster yet is much less pricey. I personally wasn’t a huge fan of the texture of this fish or it’s gross slimy skin.

This is what monkfish looks like: (check out those teeth!)

I forgot what kind of fish this was but it looked so sad with its big eyes and pouty mouth as it was getting covered in salt so i had to take a pic. 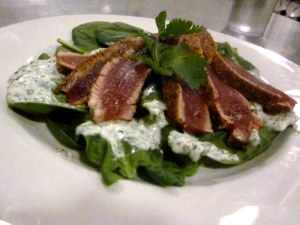 And cod fritters. These were delicious, basically because I could just taste fried dough. When isn’t anything fried tasty?

Again, I’m happy I tried out all the fish and now know how to prepare it in various ways but I’m not sure how often I want to incorporate fish into my diet. After going without it for so long my body felt kind of off after class, it was like all the energy had been drained out of me. Perhaps the high protein and fat content was making my body work extra hard to digest. Is it possible to be a vegan that sometimes eats fish?

After class ended there was a book signing at my school for Chloe Coscarelli’s new cookbook, Chloe’s Kitchen. I’ve been following Chloe’s blog since she won Cupcake Wars and it was really exciting to meet her in person! Chloe went to the Natural Gourmet Institute as well so it was nice to meet someone successful and get some tips from her. 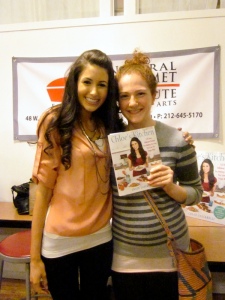 Plus the mini vegan cupcakes they served were DELICIOUS!

I actually made her pancake recipe for dinner. Normally I would go with something more savory and protein-packed for dinner, but after all that fish I wanted something sweet and easy to digest. These were the best pancakes I’ve ever eaten, they were so fluffy and tasty especially smothered in almond butter! 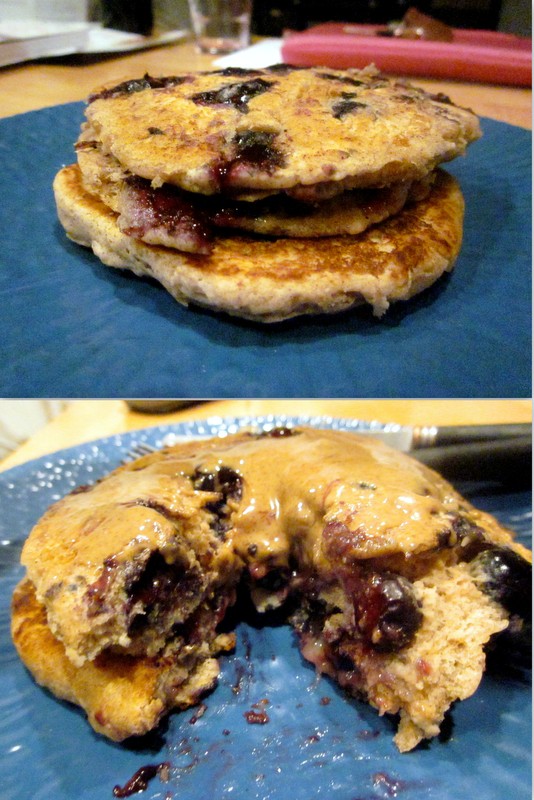 I need to go shower now because I smell like fish. See ya tomorrow! 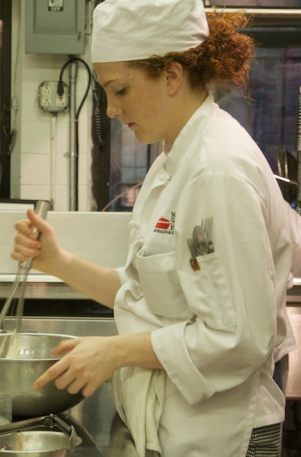 Hi! Thanks for stopping by! I'm Fiona, the Well-Fed Redhead! I recently graduated from culinary school where I learned how to be natural foods chef. Here you'll find my adventures (and misadventures) in the kitchen on the road to becoming a professional chef and beyond. For more about me see my "About" page!